After two months in China, the country where I grew up until 12 years ago, I feel anti-culture shock. It has changed so much, the bullet trains, the highways, the constructions of new cities everywhere, high rises, etc., and the way people live and talk, you don't feel it unless you really stay there for extended periods of time. For this time, 10 cities across the country was good enough for me. 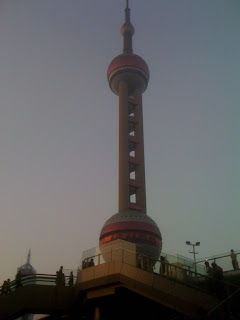 1. Tons of people
People everywhere, on the streets, in the department stores, restaurants, hospitals, subways, buses. Anywhere you go, you bump into people. The day we went to the World Expo in Shanghai, there were 700 thousands people visiting on that day. The day before our visit, which happened to be a Sunday, over 1 million people.
The waiting for the Saudi Arabia theme park was more than 8 hours, for Germany, 4 hours. Not sure about the motivation behind all these people waiting in lines, but this is China, if anything gets popular, people will wait in lines to get it. Imagine if each person in line pays you $1 for your product or service, how much would it do to your business.
2. Standard of living matching western world
Most city dwellers have private cars, sometimes more than one per family. Ever since the traffic control by license plate number was enforced in Beijing, i.e. you cannot drive your car one day each week, families started to purchase the second car, and the total car ownership increased at a faster speed. The city of Changsha, capital city of Hunan province, with a population of 3 million, has above 1 millions motor vehicles registered.
Modern kitchens, hot waters, electronic appliances, and fancy toilets, used to be luxurious items, now appears in regular families. Take a visit to the shopping mall in Shanghai Pudong 正大广场, 10 times larger than the Valley Fair in the Silicon Valley, where you will find all of the top U.S. brands in apparels and even Best Buy, only that the prices are higher when converted into dollars. Talking about purchasing power.
3. Transportation and communication infrastructure
It used to take me 8 hours by train from Changsha to Guangzhou, now only 2 hours on the high speed train (和谐号). Just head directly to the train station, and every half hour will be one taking off. It runs at 350 kilometers per hour, and you can sip a cup of coffee in the spacious seat without noticing any turbulence. The 2 hour trip costs 333 yuan, which is about $50 dollars, less than half the gasoline costs if you drive your own car. The fastest bullet train now is the one from Shanghai to Hangzhou, more than 400 kilometers per hour, 40 minutes trip.
Productivity and efficiency is measured by how fast people get things done. As the speed at which people and goods are transported increases dramatically, the overall economy is destined to advance accordingly. 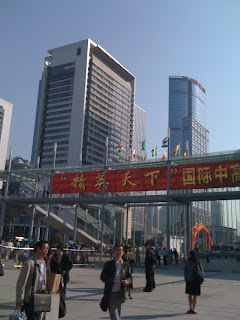 4. Key industries monopolized by government
Can't avoid talking about the downsides. The most prominent road block for doing business in China is that it's not a completely free market economy, but one that operates under the "guidance" of the government.
Key industries are dominated and monopolized by the central government, transportation, banking, insurance, telecommunication, Medicare and even education. As such, these industries have their own rules of operation, some times strange rationales for key decisions. One has to either get to know the key personnels in the government, or avoid these industries completely.
In summary, big changes are happening in China, and lots of opportunities if you know where to look. The government, central and local ones, in the recent years have become more and more open-minded, and have set force very attractive policies to encourage people to go there to do business (more on this in later posts). So come to China.
Email ThisBlogThis!Share to TwitterShare to FacebookShare to Pinterest
Related topics: business model, china
Newer Post Older Post Home