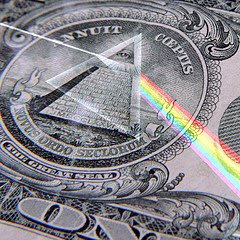 Rather than counting on a few venture capitalists, crowd funding raises fund by appealing to a large, really large, number of ordinary people for small donations or investments. So far it has worked brilliantly for a number of cases in the media industry, film and music making, by attracting funding from the community of future customers. See Wall Street Journal, Time, and PBS.org.

By appealing to the crowd, i.e. the long tail, it significantly lowers the risk on the investor side. At the same time, the project needs to be so appealing, it needs to acquire a large audience, either through the statue of the initiator or the idea itself. I guess this is also why it has worked for the media, but not yet for the technology industry, not enough geeks.

There are also regulations from the Securities and Exchange Commission that limits the form and amount of equity investments, for instance lending site prosper.com is working hard to gain access across all states. However, I believe as technology and innovation marches on, the regulators will have to adapt.

Entrepreneurship is the ultimate driver behind long-term economic growth. We need to enable entrepreneurs to pursue their passion by allowing capital to flow as liquidly as possible to the innovators, inventors and game changers.

Feasible? Impossible? Please use the comment form to give your feedback.